It's the end of October and what a month it's been! I feel a bit like it's just been one thing after another! Our bathroom at home tried to come downstairs via the kitchen ceiling, I was ill and in bed for a week (which I never do), then our daughter has been ill. It's been the Christmas sale, which is awesome and exciting but also involves a lot of work before and after, it's been non stop. 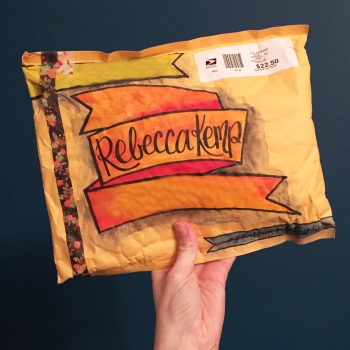 This amazingly beautiful #happymail arrived a couple of weeks ago. Yes weeks, and it's been sat on my desk unopened. "Are you nuts!?" I hear you gasp. Well yes, I might be. The problem is, I've been blessed to have had a lot of beautiful happy mail arrive this last month, and with all that's been going on I haven't replied to a single one yet. And when this arrived the guilt I felt was huge. I thought of all the mail I haven't yet replied to and how I haven't even really fully appreciated the goodies I've been sent because I've been so chaotic. I saved this parcel, to open when I had "more time" to appreciate it and then thought maybe if I saved this one until I had more time I would not have another guilt upon me. But actually that was just plain stupid. I felt guilty for not opening it, as well as not replying to everyone! Today when I woke up (after a bad nights sleep stressing about everything) I decided to make a change. Instead of being chaotic and letting things get on top of me, I was going to be intentional and make time in my day. I got up early and had some quiet time with my Bible. I confess, this is something that I haven't done in too long! I got stuck into the Psalms and remembered why I love them so much. This evening, once little one was in bed, I did some work and then I took time for me. I had some "self care" time, ate ice cream and watched a movie. Then I have come and sat on my bed and opened this beautiful parcel and my heart has just exploded! My sweet friend Christi sent this to cheer me, the letter actually starts "I know you have been super stressed..." it's full of fantastic treats like chocolate and my favourite biros that you cannot buy in the UK, as well as some awesome craft treats and the sweetest letter. If I had made time when it arrived, how much it would have blessed me in the stress! And would have cheered me no end whilst I was ill in bed. Not opening it was so daft! So what am I saying? (Other than I can be an idiot!?) I think I just want to encourage you all to not wait until you "have time" for things, instead MAKE time for things. Make time to look after yourself, otherwise you just end up burning yourself out. Make time for self care, whatever that looks like for you. Let your friends love you and care for you, even if you cannot repay the favour straight away! Make time for the things that bring you joy and restore your soul. You're not too busy to do these things. You can be intentional too, and I promise you won't regret it if you do. I am going to bed tonight so much lighter and happier because of the things I made time for today!

Look after yourselves XO